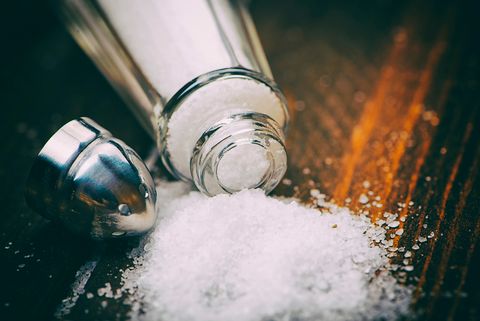 When you think of iodine—the chemical element that helps your body produce thyroid hormones and regulate energy—you probably associate it with table salt. That’s because back in the 1920s, researchers discovered that people in certain areas of the country were developing goiters, or enlarged thyroid glands, due to iodine deficiency.

The solution? The US government advised some companies to start adding iodine to salt—and the intervention helped a lot. “Overall, as a country, we have been iodine sufficient since the 1940s,” says Elizabeth Pearce, MD, an associate professor of medicine at Boston University School of Medicine, and deputy regional coordinator for the Americas at Iodine Global Network, an organization for the sustainable elimination of iodine deficiency worldwide.

But while most of us don’t really have to worry about our iodine levels, “there’s a major caveat,” says Dr. Pearce. “National surveys have shown that women who are pregnant are mildly deficient.”

Women who are pregnant or breastfeeding are at high risk for iodine deficiency because “there’s an increased need for iodine for fetal thyroid development,” says Brittany Henderson, MD, an assistant professor of endocrinology and metabolism at Comprehensive Cancer Center at Wake Forest Baptist Medical Center. And because iodine is found in foods other than salt—like milk, seafood, bread, and eggs—other high-risk groups include vegans, vegetarians, and those who don’t eat dairy or bread.

While iodine deficiency is difficult to diagnose, that doesn’t mean you can’t learn to spot the warning signs and how to make sure you’re getting enough. Here’s what you need to know.

What are the signs of iodine deficiency?

Symptoms typically only appear when iodine deficiency is severe, which is rare. Even though there is a test for iodine deficiency (a urine analysis), and you can ask a general practitioner or an endocrinologist for it, Dr. Pearce says that it’s more often used to examine large populations for public health research, rather than individuals.

“There is huge variation in iodine levels day to day and even hour to hour, so you really need at least 10 or 12 tests in one person to know what the person’s status truly is,” she explains. Still, there are a few red flags to watch out for.

When your iodine intake falls below 100 micrograms (mcg) per day, your body starts to pump out more of a thyroid hormone called TSH, according to the National Institutes of Health (NIH). This can lead to an enlarged thyroid gland (also known as a goiter), which is the most common symptom of iodine deficiency, says Melissa Majumdar, MS, RD, senior bariatric dietitian at the Brigham and Women’s Center for metabolic and bariatric surgery, where she commonly deals with nutrient deficiencies.

A goiter may or may not be visible as a lump in the front of your neck. “Sometimes you won’t notice it unless you do an ultrasound or CT imaging,” says Dr. Henderson. If you have a goiter, you may experience a choking sensation or have difficulty swallowing or breathing.

“Patients with hypothyroidism usually have at least two or three symptoms,” says Dr. Henderson. Just note that these symptoms could be due to several other health conditions or even medications that you may be taking, so check in with your doc to identify the root of the problem.

Infants and children whose mothers were iodine deficient while pregnant or breastfeeding could experience lower IQ, mental retardation, slowed growth, or problems with speech and hearing. Mild to moderate iodine deficiency has also been linked to a higher risk of ADHD in children, the NIH says.

How to get enough iodine

A 2013 report found that the average urinary iodine concentration for adults was 144 mcg/liter and for pregnant women, 129 mcg/liter, meaning most American adults are in the ballpark, but pregnant women tend to get an inadequate amount. The best way to ward off iodine deficiency is to make sure you reach these recommended intakes from the NIH:

Anything under those amounts isn’t ideal—but anything over those amounts can also lead to hyperthyroidism (aka overactive thyroid) and other problems. Because there’s no reliable test for iodine deficiency, the best thing you can do is prevent it from occurring in the first place.

So first, make sure that you’re buying and eating table salt that is iodized. “Only about half of the table salt sold in this country is iodized,” says Dr. Pearce. When salt is iodized, it must say so on the packaging. Beware: Oh-so-trendy sea salt, as well as salt that’s found in processed foods, is generally not iodized, says Majumdar. (Although, some brands do make iodized sea salt if you prefer to go the flakier route.)

You can tweak your diet to include more iodine-rich foods, as well. “Natural sources of iodine include anything that lives and grows in saltwater, so clams, lobsters, oysters, or sardines,” says Majumdar. “We do get some from milk, eggs, and vegetables as well, but that varies a bit more.”

While the American Heart Association recommends eating no more than 2,300 milligrams of sodium per day (ideally 1,500 for most adults), one-third of a teaspoon of iodized salt will still get you 150 mcg of iodine.

Supplements are not typically recommended if you’re not pregnant, breastfeeding, or eating a restricted diet because the risk of deficiency is low. If you are pregnant or breastfeeding, The American Thyroid Association recommends taking a prenatal vitamin that contains 150 mcg of iodine—check the label to be certain.

And if you’re vegan or vegetarian, or if you don’t eat dairy or bread, talk to your doctor about whether it’s a good idea to take an iodine supplement, since it can negatively interact with medications (like blood pressure meds) that you’re already taking.

This content is created and maintained by a third party, and imported onto this page to help users provide their email addresses. You may be able to find more information about this and similar content at piano.io
Advertisement - Continue Reading Below
More From Vitamins & Supplements
The 10 Best Probiotic Supplements for Gut Health
Best Meatless Sources of Vitamin B12
Advertisement - Continue Reading Below
14 Foods With More Vitamin C Than An Orange
6 Weird Signs You’re Not Getting Enough Iron
5 Signs You're Not Getting Enough Vitamin D
11 Effective Solutions For Sciatica Pain
9 Signs You're Not Getting Enough B12
This Popular Heart Health Supplement Doesn't Actually Prevent Heart Disease
Supplements You Should Be Taking At Every Ag
Presented by
iWi
Do You Actually Need To Take A Multivitamin?