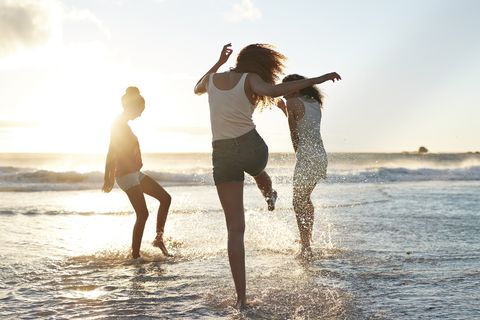 You already know that your body needs vitamin D to build strong and healthy bones—but that’s not the only thing the sunshine vitamin has going for it. Vitamin D helps your body absorb calcium (another crucial bone-builder), plays a role in proper cell growth, and even reduces disease-causing inflammation, according to the National Institutes of Health (NIH).

And the truth is, many of us just simply don’t get enough vitamin D. In fact, nearly 42 percent of American adults are deficient, according to a 2011 study published in the journal Nutrition Research. Globally, an estimated 1 billion people don’t get adequate amounts of vitamin D.

That’s because very few foods naturally contain the stuff. It’s called the sunshine vitamin for a reason: a majority of the vitamin D your body produces stems from the sun’s ultraviolet rays. That can be a problem if you’re consistently wearing sunscreen to protect your skin from cancer or if you live in an area that doesn’t get much light—say, the northern U.S. in the dead of winter.

Luckily, your skin still takes in some vitamin D even when you’re wearing sunscreen (and certain foods contain more D than others, so it’s not impossible to find in your diet). Neglecting your D intake does come with its own risks, like spiking your risk for high blood pressure and diabetes by two and a half times, says Michael Holick, MD, author of The Vitamin D Solution and professor of medicine, physiology and biophysics at Boston University Medical Center. Vitamin D deficiency can also increase your risk of depression, certain cancers, dementia, and several other health problems.

Think you might be dipping low in D? Here are the top five signs of vitamin D deficiency—and exactly how to make sure you get enough.

It’s often difficult to tell if newborns are deficient in D, but a sweaty forehead is one of the first noticeable symptoms, Dr. Holick says. The same rings true for adults, so if you’re “glowing” while your activity level remains steady, your body temp is close to 98.6°, and your environment isn’t too crazy hot, you may want to consider talking with your doctor about getting your vitamin D levels tested.

Being deficient in vitamin D can leave you feeling exhausted, even when you’re able to get enough sleep. In fact, research finds that people who are deficient in D notice improvements in their fatigue after they get their levels back up.

What’s more, muscle strength isn’t just a matter of pumping iron. One study from the University of Tulsa found that athletes who had inadequate levels of vitamin D in their blood couldn’t lift as much weight, run as fast, or jump as far or high, potentially because getting enough vitamin can lead to more powerful muscle contractions.

Many things can make you feel down, but more and more research is linking true depression with a shortage of vitamin D, especially when it comes to seasonal affective disorder, according to one international review of studies.

While scientists are still trying to figure out why the two are linked, the study authors explain that vitamin D may work in the same areas of the brain—and impact the same feel-good hormones, like serotonin and dopamine—as those that affect your mood.

“It’s often subtle, but some experience aches and pains in the bones, known as osteomalacia,” says Holick.

Those who are diagnosed with arthritis or fibromyalgia may actually be shy of enough D, as a deficiency can cause joints and muscles to ache. If your discomfort lasts for several weeks, ask your doctor if a vitamin D deficiency could be the cause and if your treatment program should include the vitamin.

You broke a bone

You stop building bone mass around age 30, and a lack of vitamin D can speed up or worsen osteoporosis, a condition in which your bones become fragile and more prone to fracture, according to research published in The American Journal of Clinical Nutrition.

How to get enough vitamin D

Because symptoms of vitamin D deficiency can be caused by several different health problems or conditions, it’s important to have your blood tested first to make sure you’re truly deficient.

You could easily get all the vitamin D you need through sun exposure, but the American Academy of Dermatology strongly affirms that wearing an SPF of 30 or higher is crucial if you want to prevent the development of various skin cancers. Remember, your skin likely still takes in a bit of vitamin D even when you’re wearing SPF, says the NIH.

Your first step, then, is to load your diet with as much vitamin D as you can. Certain fish—like salmon, swordfish, sardines, and tuna—will be your best sources, but you can also find vitamin D in eggs, cheese, mushrooms, or fortified orange juice, milk, cereal, or yogurt.

Then, if you’re still consistently experiencing several of the symptoms above, talk to your doctor. He or she can test your D levels and prescribe a supplement if necessary. Most adults need at least 600 international units (IUs) of vitamin D per day (800 IUs if you’re over 70), according to the NIH. Many other organizations recommend a higher dose, though, so work with your doctor to find an amount that works best for you and your needs.

This content is created and maintained by a third party, and imported onto this page to help users provide their email addresses. You may be able to find more information about this and similar content at piano.io
Advertisement - Continue Reading Below
More From Depression
Why Am I Always Super Tired?
What Happens When You Stop Taking Antidepressants?
Advertisement - Continue Reading Below
8 Mood-Boosting Tips to Prevent SAD
10 Surprising Signs of Depression
6 Women Share What It's Actually Like On Being On Antidepressants
The Truth About Whether Birth Control Makes You Depressed
6 Women With Depression Share How They Stay Motivated To Exercise
Anti-Depressants Really Do Work, According To Major New Study
The Incredible Reason Why This 59-Year-Old Mom Trains For Ironman Races
6 Mood-Boosting Foods to Help Soothe SAD This Winter