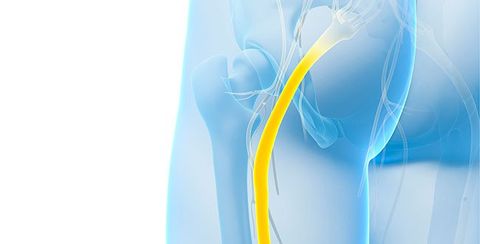 Sciatica is leg pain caused by a pinched nerve in the lower back. Although the pangs begin in nerve roots located on either side of the lower spine, they then course through the sciatic nerve, which runs the length of each leg from the buttock down to the foot. The leg agony, called radiculopathy, "is often worse than the back pain," says William A. Abdu, MD, medical director of the Spine Center at Dartmouth-Hitchcock Medical Center. Usually felt in one leg, the sensation "can be intolerable," says Birgit Ruppert, a physical therapist at the Spine Center. "Some people liken it to the nerve pain you experience if you have a toothache."

Related Story
5 Ways To Tell If You Have Sciatica

The most common cause of sciatica is a herniated disk: When a disk develops a tear or crack and bulges into the spinal canal, it can pinch the sciatic nerve. Usually, symptoms clear up within about six weeks, but for some people, the pain can last far longer.

Ready to start feeling better? Here are a few treatments worth trying.

Sixty percent of people with sciatica who didn't get relief from other therapies and then tried spinal manipulation experienced the same degree of pain relief as patients who eventually had surgery, found a 2010 study in the Journal of Manipulative and Physiological Therapeutics. The 120 people in the study saw a chiropractor about 3 times a week for 4 weeks and then continued weekly visits, tapering off treatment as they felt better. In people who responded to chiropractic care, benefits lasted up to a year. "Spinal manipulation may create a response in the nervous system that relieves pain and restores normal mobility to the injured area," says study researcher Gordon McMorland, DC, of National Spine Care in Calgary, Alberta. "It also reduces inflammation, creating an environment that promotes the body's natural healing mechanisms."

"You can get relief as soon as the first session, though it takes about 12 sessions to see improvement," says Jingduan Yang, MD, assistant professor at the Jefferson Myrna Brind Center of Integrative Medicine at Thomas Jefferson University. A small study in the Journal of Traditional Chinese Medicine found that of 30 people with sciatica, 17 got complete relief and 10 saw symptoms improve with warming acupuncture, in which the needles are heated.

A study in the journal Pain reported that people with chronic back pain who practiced Iyengar yoga for 16 weeks saw pain reduced by 64% and disability by 77%. Although yoga's effects on sciatica are less clear, gentle forms may be beneficial. By strengthening muscles and improving flexibility, a yoga practice can help sciatica sufferers "move and function better so they don't fall into a posture that aggravates the sciatica," says James W. Carson, PhD, a psychologist at the Comprehensive Pain Center at Oregon Health & Science University. For extra grip and stability, try these Natural Fitness Grip Socks ($13, bedbathandbeyond.com ).

Don't expect a chilled-out spa massage if you have sciatica. In this instance, trigger-point therapy is best, says Jeff Smoot, vice president of the American Massage Therapy Association. The sciatic nerve sits underneath a muscle called the piriformis, which is located beneath the glutes. "When the piriformis muscle gets tight, it pinches the sciatic nerve, causing tingling and numbness down into the leg," says Smoot. He applies pressure to irritated and inflamed areas, or trigger points, in the piriformis muscle, as well as in muscles in the lower back and glutes. Typically, Smoot schedules treatments 7 to 10 days apart. If patients don't see progress by the fourth visit, "they need to try another form of therapy," he says.

MORE: This Is The Pain-Relief Pillow Amazon Users Swear By For Better Sleep

St. John's wort oil ($10, amazon.com), a liniment, is "one of my favorites for nerve pain," says Tieraona Low Dog, MD, director of the fellowship at the Arizona Center for Integrative Medicine. Apply the anti-inflammatory oil two or three times a day where there's pain. Another option: an OTC cayenne pepper cream ($17, amazon.com); capsaicin, found in chiles, hinders the release of pain-causing compounds from nerves. For severe cases, Low Dog uses the prescription chile patch Qutenza, designed for shingles pain. "One application is effective for weeks," says Low Dog.

(Want to pick up some healthier habits? Sign up for FREE to get healthy living tips, weight loss inspiration, slimming recipes and more delivered straight to your inbox!)

Because the sciatic nerve is buried deep within the buttock and leg, ice or heat on the surface of the body won't ease that inner inflammation. But the time-honored treatments can act as counterirritants—that is, "they give your body other input in the painful area, and that brings the pain down a notch," says Ruppert. Apply an ice pack or a heating pad ($28, amazon.com) as needed for 15 minutes.

The herbal medication devil's claw is "quite a potent anti-inflammatory, working like ibuprofen and similar drugs to inhibit substances that drive inflammation," says Low Dog. She generally starts patients on 1,500 to 2,000 mg twice a day. Look for a brand that has a standardized extract of roughly 50 mg of harpagoside, the active compound. Safety reviews show that the supplement is well tolerated by most people but should be avoided by patients with peptic ulcers or on blood-thinning medications. (Find supplements you can trust here.)

Taking a nonsteroidal anti-inflammatory drug, either OTC (like ibuprofen) or Rx, can ease the distress. Because painful muscle spasms may also accompany a disk herniation, doctors sometimes prescribe muscle relaxants or pain-reducing tricyclic antidepressants. (Just don't make any of these 13 common mistakes you're making with your pain meds!)A caveat: "These won't help with the pain caused by pressure on the sciatic nerve," says A. Nick Shamie, MD, a spokesperson for the American Academy of Orthopaedic Surgeons.

People whose pain doesn't lessen within about a month and who aren't helped by other therapies may find their pain remedied by an x-ray-guided injection of steroid into the lower back near the sciatic nerve, says Raj Rao, MD, a spokesperson for the AAOS. "The hope is to reduce inflammation within that nerve branch," explains Rao. Because of concerns about side effects, such as loss of bone density, the epidural shots are limited to three a year.

Moving is usually the last thing people dogged by sciatica want to do, but it's important to be physically active. "Lying in bed makes it more likely that the pain will last longer," says Ruppert. "Exercise increases blood flow to the disk and the nerve, helping to get rid of the chemicals causing the inflammation." Take 15- to 20-minute walks. If that hurts too much, give swimming or water aerobics a try; there's not as much pressure on the back when you're in the water, says Ruppert. It may also be worth seeing a physical therapist, who can prescribe stretching exercises to restore flexibility to the back or moves that strengthen core muscles, helping to stabilize the spine and reduce the likelihood of a similar injury.

After 4 to 6 weeks of unremitting symptoms, patients may qualify for surgery. The Spine Patient Outcomes Research Trial found that those who had surgery for a herniated disk had greater decreases in pain and disability 3 months afterward than patients who did not. The benefits lasted up to 4 years.

This content is created and maintained by a third party, and imported onto this page to help users provide their email addresses. You may be able to find more information about this and similar content at piano.io
Advertisement - Continue Reading Below
More From Vitamins & Supplements
The 10 Best Probiotic Supplements for Gut Health
Best Meatless Sources of Vitamin B12
Advertisement - Continue Reading Below
14 Foods With More Vitamin C Than An Orange
The 3 Most Common Signs of Iodine Deficiency
6 Weird Signs You’re Not Getting Enough Iron
5 Signs You're Not Getting Enough Vitamin D
9 Signs You're Not Getting Enough B12
This Popular Heart Health Supplement Doesn't Actually Prevent Heart Disease
Supplements You Should Be Taking At Every Ag
Presented by
iWi
Do You Actually Need To Take A Multivitamin?